Edit
watch 01:54
Obi-Wan Finale - The Loop
Do you like this video?
Play Sound

The 'Duke of New York' was an inmate in New York that considered himself "A-Number One." In 1997, his faction kidnapped President Harker, who crash-landed inside the penitentiary.

The Duke planned on escaping from the penitentiary, utilizing the expertise of Brain, who made gas for him and obtained a diagram of the mined 69th Street bridge.

After the President crash-landed in the penitentiary, the Duke captured him. The Duke later came to see Brain for the bridge diagram, but Brain was not there. The Duke soon went to his train yard hideout, where the President was being kept. Brain led Snake Plissken there, telling the Duke he was forced to do so. Plissken was captured by the Duke, who used Plissken's gun to torture the President.

The Duke forced Snake into a ring to fight to the death with Slag, announcing that when they made their escape across the 69th Street bridge, Snake's head would be sitting on the hood of his car.

Brain and Maggie managed to escape the facility with the President, prompting the Duke and his men to go after Brain. They ambushed Snake, Brain, Maggie, and the President at the ground floor of the World Trade Center, but the group managed to slip away.

The Duke chased them across the 69th Street bridge and ran over Maggie, killing her. He then attacked Snake as the President ascended over the prison's containment wall. Snake managed to subdue him and start his own climb over the wall. The President then brandished an assault rifle and maniacally shot the Duke to death. 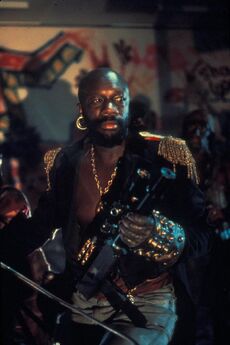 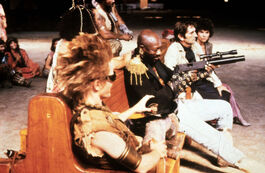 The Duke and his followers

Community content is available under CC-BY-SA unless otherwise noted.
Advertisement