Plissken served in the United States Army, achieving the rank of Lieutenant. He served with the Special Forces unit Black Light and earned two Purple Hearts between Leningrad and Siberia. He was the youngest man to be decorated by the President.

Around 1993, Snake and his associates Fresno Bob and Harold Hellman embarked on a job in Kansas City. However, Hellman abandoned them and Bob was killed by the United States Police Force.

In 1997, Snake was arrested for robbing the Denver Federal Reserve Depository with his friend Bill Taylor, who was killed by the United States Police Force.

Snake was processed at Liberty Island Security Control, to be imprisoned in the New York Maximum Security Penitentiary. When John Harker, President of the United States, crash-landed inside the prison while carrying an important tape for the Hartford Summit, Commissioner Bob Hauk offered Snake a mission to retrieve the President within twenty-four hours in exchange for a pardon from his crimes.

Snake accepted and was briefed on the mission. To ensure that he would complete this assignment, he was then injected with capsules containing small explosives that would explode at the end of his mission's time limit, killing him.

Commencing his mission, Snake flew a Gullfire to the World Trade Center and proceeded to follow a homing beacon placed in a vital signs bracelet the President wore. His search led him through an opera house where he met the cab driver Cabbie. Outside the opera house, he fended off a few hostile prisoners and found the vital signs bracelet being worn by a drunk. Informing Hauk of the situation, Snake was told to continue his mission.

He was then pursued by a group of crazies and sought refuge in a dilapidated Chock full o'Nuts. There, he encountered a woman who asked him to get her out of the prison with him, but she was then pulled through the floor and killed by crazies. Snake ran from the crazies until Cabbie – whilst playing a tape of "Bandstand Boogie" – found him and picked him up, telling Snake that the President had been taken by the Duke of New York.

Cabbie took Snake to Harold Hellman – now going by "Brain" – and Brain's "squeeze," Maggie. Brain worked closely with the Duke, who was planning an escape from the prison through the use of a diagram Brain had made of the mined 69th Street bridge.

Brain reluctantly agreed to help Snake. Outside, the Duke and his entourage arrived to see Brain, who hid with Snake and Maggie as Cabbie fled. Snake then commandeered a vehicle from the entourage and escaped the area with Brain and Maggie.

Brain led Snake through Broadway and to a train yard, where the Duke held the President. Snake managed sneak in and free Harker, but was subsequently ambushed.

Imprisoned, Snake was forced to fight Slag to the death, ultimately defeating him and managing to activate a tracer the USPF had given him for his mission. Snake then returned to the World Trade Center, where Brain, Maggie, and the President reached, but the Gullfire was pushed from the building by a group of prisoners. The group went back down to the ground floor, where the Duke ambushed them but managed to escape.

Outside, they were picked up by Cabbie, who had traded Romero his hat for the President's tape. They were pursued to the 69th Street bridge as Brain helped Snake navigate. However, he ran over a mine, splitting the cab in half and killing Cabbie.

They continued on foot, and Brain accidentally stepped on a mine and died. Maggie, stricken by his death, stayed behind with Snake's revolver until being run over by the Duke. As Snake sent the President over the prison containment wall, the Duke attacked. Snake managed to subdue him and begin his ascent over the wall, but the President stopped him in order to shoot the Duke to death before allowing Snake to complete his climb.

Over the wall, Hauk demanded the tape from Snake, who gave him Cabbie's "Bandstand Boogie" tape instead. The explosives in Snake's neck were then deactivated with only seconds to spare.

As the President prepared for the Hartford Summit, he offered Snake anything in return for his rescue. Snake simply asked for a moment of his time, asking how he felt about the deaths that occurred to bring him to safety. The President responded with half-hearted condolences and Snake made his way over to Hauk, who offered him a job. Snake dismissed him and walked away, destroying the President's tape and throwing it away.

By 2013, another man took the Presidential office and declared himself president for life. This president instated laws based on morals and turned Los Angeles (now its own island) into a prison. When the President's daughter stole the "Sword of Damocles" and went to Los Angeles, Plissken was sent in to get the super weapon after being infected with a virus that would kill him within a day.

After succeeding in his mission, Snake used the Sword of Damocles to shut down all electronic devices on Earth.

Snake was portrayed by Kurt Russell. Prior to his casting, Tommy Lee Jones and Charles Bronson were considered.

Snake's full name is never revealed beyond "S.D. Bob Plissken." Although present in the shooting script for Escape from New York, "Bob" was not used in the completed film. It was, however, included in Escape from L.A..

Snake in fire base 7 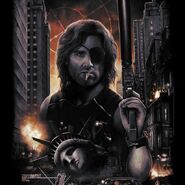 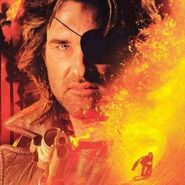 Snake Plissken in 2013
Community content is available under CC-BY-SA unless otherwise noted.
Advertisement